Easy return of products within 14 days from the date of purchase without giving reasons
Free delivery from 200,00 zł

THIS IS NOT ANOTHER AMINO ACID-BASED PRODUCT!

To understand that, you have to realize that any physical activity may influence the functioning of our immune system. Peripheral blood immune cell level has been proved to significantly decrease after exercise and it comes back to normal only after 24 hours after training is completed. Antibody production (mainly IgA-class), which is the fundamental protective function of the immune system of the mucous membrane (of the intestines but also oral cavity) acting as the first line of defence against pathogens, is also reduced. Decreased secretion of these immunoglobulins leads to enhanced ability of pathogenic microorganisms to adhere to intestinal epithelium, increased permeability of the epithelium and consequently, to increased risk of intestinal wall being penetrated by pathogens. In this manner, intestinal barrier loses one of its basic functions (uncontrolled, increased permeability and lack of selectivity) to some extent exposing the body to expansion of pathogens and their toxins, which in extreme cases may lead to the emergence of the multiple organ dysfunction syndrome.In thus disturbed homeostasis, effective regeneration of the body after training is by no means possible.

The level of one bacterial toxin after exercise was analysed in a group of marathon runners, and in 80% of cases it turned out to exceed the upper permissible limit. In case of 2% of individuals, which was hard to believe, it was above the level deemed fatal (1). Analogous results have been found in studies conducted among ultra triathlon athletes, in whom the level of the same endotoxin went up more than 4 times after completed race. At the same time, they reported a 60% fall in concentration of anti-toxin antibodies (2). Direct physiological effects reported by athletes include: urinary urgency, flatulence, belching and stomach problems, that is non-specific symptoms, practically never associated by athletes with increased poisoning of the body with bacterial toxins, but more often with excessive fatigue or influence of the training-related diet.


IMMUNE RESPONSE MAY BE MODULATED BY DIETARY FACTORS.

Experiments in which animals (3,4) were administered plasma proteins reported 40% reduction of plasma urea levels (increased effectiveness of protein use and/or reduced amino acid catabolism); food amounts taken daily were also significantly increased and efficacy of nutrient adaptation was improved by 19%. Increased amino acid availability was associated with improved average daily body mass gains by as much as 23%. Dry body mass progress increased by 16%.

Other studies on the other hand, have shown that taking powdered plasma (5) brought positive changes in the structure of intestinal epithelium (bigger length of intestinal villi, reduced passive permeability of the villi) and the resulting improved functioning of the epithelium (improved nutrient absorption).

GOLD BEEF-PRO™ PLASMA may be a real hope for individuals working out hard or exposed to chronic stress.

Considering the entire body of described research, it appears obvious that supplementation with GOLD BEEF-PRO™ PLASMA may:
provide huge potential for individuals subject to extremely exhausting physical training, considerably contribute to reducing the inflammation and eliminating dysfunction of the intestinal barrier, improve functioning of the immune system and boost nutrient absorption, considerably contribute to acceleration of tempo and effectiveness of after-training regeneration, shortening time of disturbed body homeostasis and level of endotoxemia in individuals working out hard.
UNIQUE AMINO ACID PROFILE IS JUST THE ICING ON THE CAKE

What is more, GOLD BEEF-PRO™ PLASMA meets the highest standards set out for high-protein products administered as tablets:
- very high dose (as much as 1750 mg) of highly digestible protein per one Mega Tabs® tablet,
- contains a complete profile of proteinogenic amino acids with significant share of exogenous amino acids (EAA), including branched-chain amino acids (BCAA), displaying highly anabolic and anti-catabolic activity
- posology was adjusted according to specific body weight,
- the product is lactose-free, therefore it may be successfully taken by individuals suffering from lowered quality of life due to allergy to this nutrient or to milk proteins
- the product has residual carbohydrate (less than 0.5 g) and fat (less than 0.5 g) content per suggested dose.

- L-arginine (Arg). 3-fold higher content than in whey proteins. Although L-arginine is a relatively exogenous amino acid, its internal biosynthesis is not able to balance its insufficient supply in food during periods of increased demand (i, ii), such as in case of more intensive physical exercise or body ravaged by a disease or accident.

Until present, it has been proved beyond all doubt that L-arginine: boosts synthesis of growth factors (polyamines) participating in tissue growth and, as proved in clinical trials, promotes protein synthesis in the body. Together with glycine and L-methionine, it also participates in creatine synthesis. Scientific literature also provides findings about Arg influence on increased secretion of the growth hormone (clinical trials on healthy men; iii)
- glycine. Content about 13-fold higher than in whey proteins. Studies on humans (iv) have proved that increased glycine consumption contributes to reduced fatigue and subjective improvement of the quality of sleep.

- L-tyrosine. Content about 1.5-fold higher than in whey proteins. Two studies (v, vi) conducted on humans confirmed that supplementation with L-tyrosine is associated with significant improvement of mood and cognitive functions, especially in the period of stress or activity. By extrapolating these results on physically active people, a conclusion may be made to improve the focus during times of increased physical effort, which unquestionably shall be reflected in training effectiveness.

- L-serine. Content higher than in whey proteins. It participates in reducing dysfunctions of the immune system resulting from chronic fatigue (vii), which may be of high importance for people exposed to continuous, highly intensive physical strain which consequently is likely to lead to over-training and any possible consequences stemming from this fact.

- L-tryptophan. Content higher than in whey proteins. A 2010 study on athletes (viii) proved that supplementation with L-tryptophan may increase physical strength during aerobic exercise with over maximum anaerobic spells.

- L-histidine. Content higher than in whey proteins. Together with beta-alanine, it forms carnosine in the body which is a commonly known active substance contributing to increased muscle strength. At the same time, it has a huge influence on training quality and effectiveness, especially in case of intense training.

- L-phenylalanine. Content higher than in whey proteins. In the body, it may be converted to tyrosine. Thus it becomes a precursor for synthesis of neurotransmitters such as dopamine. Tyrosine administration increases the level of catecholamines circulating in the bloodstream and in the central nervous system, thus contributing to improved effectiveness of physical exercise. 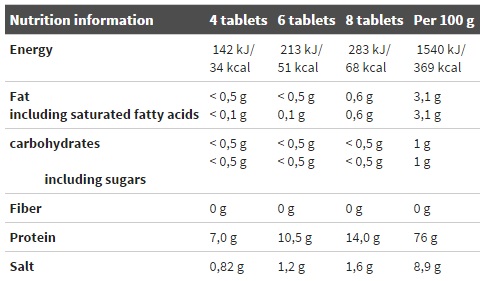 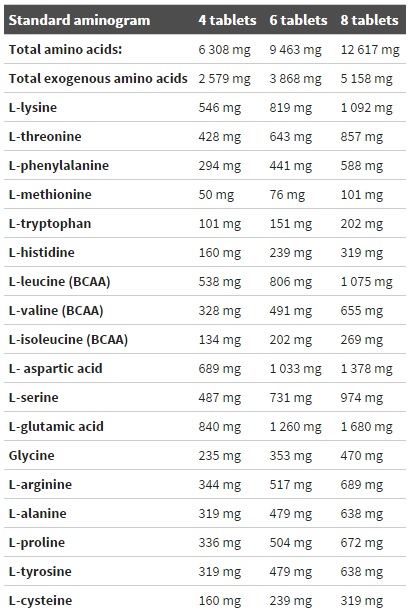 Do not exceed recommended daily dose to be consumed during the day. This food supplement cannot be administered as a substitute of a varied diet. Balanced diet and healthy lifestyle are strongly recommended. Keep out of the reach of children.